After the cold spell of snow, hail, blizzards and rain that has hit racing it is set to get milder – with the big thaw on – and the forecast somewhat decent.

“It has certainly been tough for the team with hazardous journeys to work in the early morning, heavy snow, blizzards, gales, ice – and temperatures well below zero,” said Kinneston, Fife based trainer Nick Alexander. 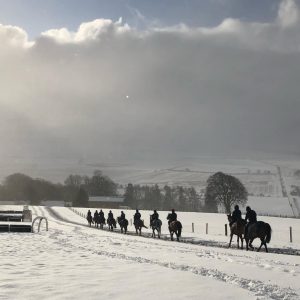 “Added to that we had frozen water supplies, followed by the inevitable burst pipe,” rued Nick.

“Throw in some very fresh horses and it’s easy to see how proud I was that they rose to the challenge unphased, setting a fine example to wider society.

“We did have some beautiful snowy days. The main gallop was open and whilst we couldn’t do all that we wanted, in terms of variety, the horses all had plenty of exercise and wanted for nothing. 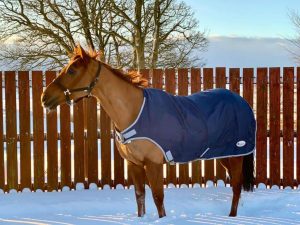 “With some race meetings postponed it made it pretty dull and frustrating for the owners. Some horses that would have run 21-28 days after their last run are now at 70-80 days, which makes for a huge hole in their season.

“We have plenty to catch up with and ideally I’d like us to have the best part of 100 runners between now and the end of April,” said Nick.

“We will need help from the BHA with some extra fixtures. The Race Planning Department has proved helpful and flexible to date, so hopefully that will continue.