Following the Irish Derby victory seven-length winner Westover is eyeing the King George VI and Queen Elizabeth Stakes in July, along with the St Leger and the Arc.

“Colin gave him a super ride, was very cool beforehand and very clear what he was going to do, and that always helps,” said trainer Beckett.

“We’ll discuss the future and see what we do next. It depends how he comes out of today. He’s in the King George, that’d certainly be an option. “He’s not ground dependent this horse. We really go where we want, when we want.

“Colin was positive from the outset, he really took the bull by the horns. Rob Hornby spoke to him and encouraged him to ride him that way.

“It’s important that you go out with your boots on on these occasions and Colin certainly did that. It all went beautifully.

“I didn’t think he’d do it like that, I really didn’t think he was capable of that at this stage. He’s still a work in progress, he’s a big, long horse and he’s going to get better with age,” said Beckett.

Hollie Doyle was the talk of the turf after winning the Northumberland Plate carrying a whopping 10st 8lbs, gaining a half length win, ahead of Spirit Mixer.

William Haggas trained My Oberon (11-4) completed a fromthehorsesmouth.info 11-1 treble at Windsor on Saturday. 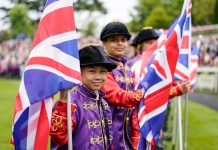