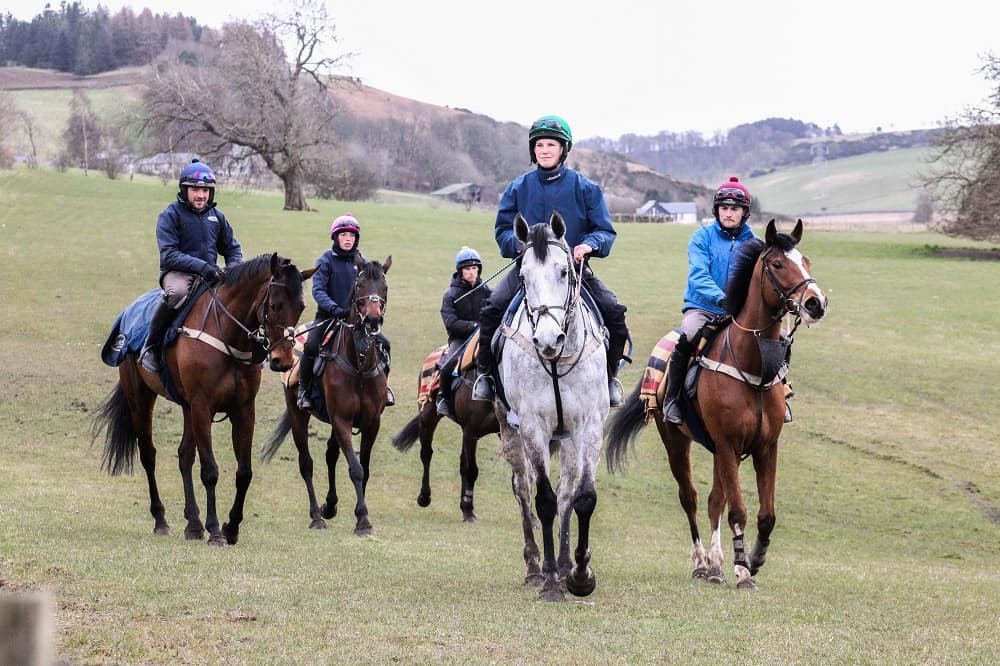 Trainer Nick Alexander, based in Bishop Hill, Kinneston, Scotland, is at home in the wake of racing’s lockdown, due to the coronavirus outbreak.

Nick is coping with the COVID-19 crisis – and the cold, breezy and snow showers: “The last two weeks have gone from racing behind closed doors at Kelso on March 16 – to various stages of lockdown,” said Nick, whose yard at Kinneston is on the southern shores of Lock Leven.

“Our initial plan of a week ago has been torn up, following the greater restrictions imposed on Monday, March 23.

“Giving an insight into how coronavirus has affected us from last Saturday, by comparison with today (March 28) that Saturday felt relatively normal, the last for some time, I suspect.”

Nick said “A massive and heartfelt thank you goes out to our fantastic team of owners and staff, both of whose loyalty and commitment have brought tears to my eyes on occasions over the last two weeks.

“Everyone realises that whilst racing horses may seem especially trivial, in the face of this pandemic, it is important to continue to look after the horses properly and also our hard working team of dedicated staff.

“The economic hardship affects everyone, but, as the Government has grasped, without health we have nothing.

“The first priority was to ensure that we heeded the Government’s advice re: bio-security, so staff were briefed; re: sanitizing and distancing, and various new protocols introduced.

“With the announcement that racing was suspended from March 17, I agreed a horse specific plan with every owner and had a team in place, working reduced hours, to support those plans.

“The subsequent announcement on Monday March 23, and restrictions on movement, led us to re-appraise the situation.

“As of this weekend we will be operating with a reduced team of seven, each working a six day week, supported by Daniel our facilities manager.

“Two senior staff are moving to live on site and the remainder of the team (9 full time and 3 part time) have entered the Government’s Job Retention Scheme; the residual team were selected on the basis of a risk assessment around their personal domestic circumstances, ability to live on site, logistics, and how their existing role fits with the job that needs done.

“We will certainly miss those that aren’t here, but I feel our approach is the best possible to minimise health risk, care for the horses and ensure that the first class team we have spent many years building, remains in tact.

“Thanks to the Government and our supportive owners we should remain viable.  I am hugely indebted to both and thank the ‘Team’ for their understanding, cheerfulness and hard work.” Nick added: “We had 62 horses on site, two have left and six live outside. Of the remaining 54 we are continuing to ride 10, and the rest are on the walker and/or turned out every day.

“It is far too cold and there is too little grass to turn the horses out 24/7 and that will remain the case for another month; the horses we are riding are a mix of youngsters and horses returning from injury, that might race in the late summer.

“Vet and Farrier support is strictly on an emergency only basis, so we are concentrating on avoiding emergencies!”. Racing has come to an abrupt halt, two weeks after the Cheltenham Festival – where over 270,000 spectators attended the four day meeting.

“It is hard to believe that it is only two weeks since the Cheltenham Festival, there was a slightly weird atmosphere, as I think everyone felt it would be the last dance for a while.

“We, and many others enjoyed a tremendous party and some wonderful racing – but should it have taken place?  “That’s a hard one, as early in the week it felt fine, but with the crisis escalating rapidly by the end of the week, it felt distinctly uncomfortable.

“The industry was following Government guidelines and I don’t think there were any negative consequences.

“However, I think we were left with a mild feeling of guilt, that perhaps led to the early curtailment of racing behind closed doors the following week. Just Brooke and Koala Keel, two of our summer jumpers.

“Yesterday (March 27) racing announced two things, firstly that the BHA was putting 80% of its staff on to the Job Retention Scheme; and secondly that plans were in place for racing to resume on May 1.

“Whilst the latter may seem premature and inappropriate, it is important to have a plan in place, as and when the worst of this crisis is over.

“The sooner it is safe for racing to resume it’s role as a major contributor to the Exchequer, rather than the taker which it will currently have become, the better.

“Far and away the most important thing though is that we all do our best to help the globe rid itself of this virus, and pray that it starts to recede, without inflicting too heavy a toll. “Whilst the last two weeks have been stressful I have always been conscious that our own disappointments and difficulties pale into insignificance, relative to the challenges and hardship faced by others.

“Personally I feel blessed to be able to see it out in an environment where I can carry on working and enjoy fresh air.  I’m taking plenty of exercise, appreciating the emergence of spring and not being in a hurry the whole time.

“So far we are all feeling healthy.” “I’m sort of hoping that out of this evil may emerge some good; our overly consumptive materialistic world has hit a serious bump in the road, that ought to cause us all to reappraise our values.  “Health, family and friendship are what matters, so please take the opportunity to enjoy quality time if you can; stay safe, stay healthy and say a little prayer for the world.  God bless.” 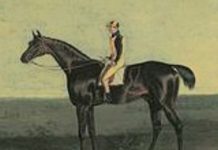 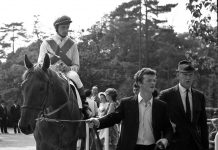 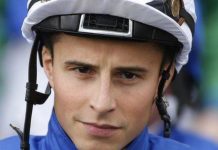