Quote: ‘Mick in fairness fancied Storting when we spoke before the race. He felt he could win and, fair play, he was right’ – jockey Tony Hamilton

Mick Channon trained Storting ridden by Tony Hamilton landed the feature Cliff Stud Thirsk Hunt Cup on May 1 in the historic mile £50,000 Handicap, the most valuable race ever held at the Yorkshire track.

Storting led approaching the final furlong, with 9-4 favourite Nugget making progress down the centre of the course, with Storting getting a neck verdict, with Astro King third, a further half-length behind.

Storting has been lightly raced over the last 18 months and was dropped in trip after finishing sixth in a 10-furlong handicap at Newbury on April 18.

“We felt Storting had a good chance from his draw (stall 7) and I thought Tony rode a great race,” said former England and Southampton footballer Channon.

“He is a homebred for Jon and Julia Aisbitt. Unfortunately, he has had quite a few problems, but we have got him through it all and it is lovely to win a nice prize like this,” said Channon.

“The drop back to a mile looked to play to his strengths. In fairness, he is a pretty talented horse with a nice pedigree and hopefully he can kick on from here,” added Channon.

Jockey Hamilton said: “We jumped away and I thought they were going to go a gallop in front, but they slowed it down on the bend.

“I had a nice position to manoeuvre out once we turned in and, from two furlongs down, I always felt I was going to hold on.

“I think the fact I was able to get a nice pitch from my draw was a help because I was able to dictate from where I was in the straight. They were coming late, but I had already gone.

“Mick in fairness fancied Storting when we spoke before the race. He felt he could win and, fair play, he was right.” 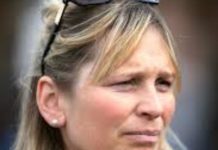