A gelding by Swiss Spirit out of Kibenga, he is a half brother to Stittenham, running his best race when fourth at Newcastle in a Nursery in October 2020.

Ernie was retired from racing in November 2020 and headed for pastures new to embark on a career out of racing.

“We were delighted to get an update from Annabelle Burne who owns our former racehorse Erniemilkcart (Bertie).

“On September 5 he was at the NCPA Pony of the Year at Warren Farm Liverpool and won all his classes.

“He was 1st hack breeding, 1st racehorse and took Reserve Champion out of the section (classes 47-52).

“Bertie came away with two sashes and a Trophy plate. Annabelle says the show was extremely busy – and Ernie didn’t bat an eye lid at anything – and the judge loved him!,” said Mick Easterby.

Erniesmilkcart was bred and born at Norton Grove Stud, a stunning black foal who was known from the start as ‘Bertie’.

He went into training in late summer 2019 and ran six times on the Flat as a two-year-old in 2020. There were no problems with his attitude, as he really loved to race, but he didn’t stay five furlongs.

“He was a trier to say the least, and could almost fly up the gallops – but would fizzle out after a few furlongs.

“If there’d been a three furlong race he’d have been a champion, because he was like lightning.

“Sadly the racing calendar doesn’t provide such an opportunity and the decision was taken to rehome him,” added Mick.

Annabelle Burne had seen him run and fallen in love with him and sent a message asking if he was available. 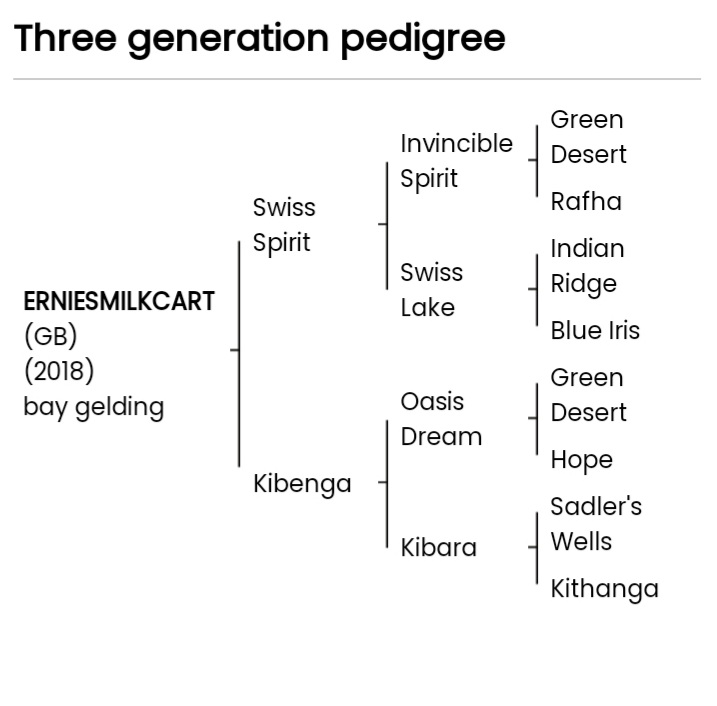 “Her timing was to perfection, and a few days later Annabelle came and met Ernie and he won her heart straight away,” said Mick.

Annabelle said: “Erniesmilkcart (Aka Bertie) arrived with me in Cumbria on December 2, 2020.

“He worked really having done some inhand showing with him in hack breeding and young stock classes.

“He came third out of 10 at his first show amongst a busy young stock class, handling it all so well and saw all types of horses from Shetland’s to Clydesdales!.

“With the looks and attitude, to match his conformation and movement, I am really excited for our future together!

“Our aim will be to carry on with the inhand and do some shows under saddle. I’m sure he will make a fabulous small hack.

“But most of all he is a pleasure to own. I’m so glad I found Bertie – and Bertie found me.”